Are we alone if the universe? Is there any life out there beyond Earth?

If so, why haven’t we found other life yet?

There are so many questions in the search for life in our galaxy and the wider universe.

As of right now, there has been no discovery of life on any world outside of planet earth, and while technology has improved with more and more earth like planets being discovered, we are no nearer to finding any type of life in the universe. YET! In this section we are going to look into what we are doing in the search for alien life, and why its important that we have a plan for the search.

There is an idea called the ‘Fermi Paradox’ but firstly to explain what a paradox is. A paradox is when something is so crazy or absurd that it can or cannot be true! Its a contradiction. Have you ever heard the saying:

‘all I know is that I know nothing’

These words are from the great philosopher Socrates. That sums up the search so far alien life.

So what or who was Fermi? Fermi was an Italian physicist who came up with the now famous Fermi Paradox. So in a nutshell Fermi claimed that:

Aliens could exist or they could not exist. Read on for a more detailed and hopefully simple explanation to what this means for the continued search.

Lets start with the ‘Drake Equation’ which is:

R∗ = the average star formations in the milky way.

fp = the fraction of formed stars that have planets.

ne = the average numbers of stars that have planets that can form life.

fl = the fraction of the potential planets that could actually support life.

fi = the fraction of planets that could bear intelligent life.

fc = the fraction of planets in the milky way where civilizations can develop communications to send into space.

L = the length of time for civilizations to release detectable signals.

And the N = the number of civilizations. So N = the rest of the figures tries to give you an answer.

This is complicated I know and what does it mean? It means it gives scientists food for thought in our continued search for life in our galaxy and beyond.

And in even simpler terms in just our own Milky Way galaxy the Drake Equation comes to an estimated figure of between 1 thousand and 100 million civilizations to could be in just the Milky Way. WOW!! 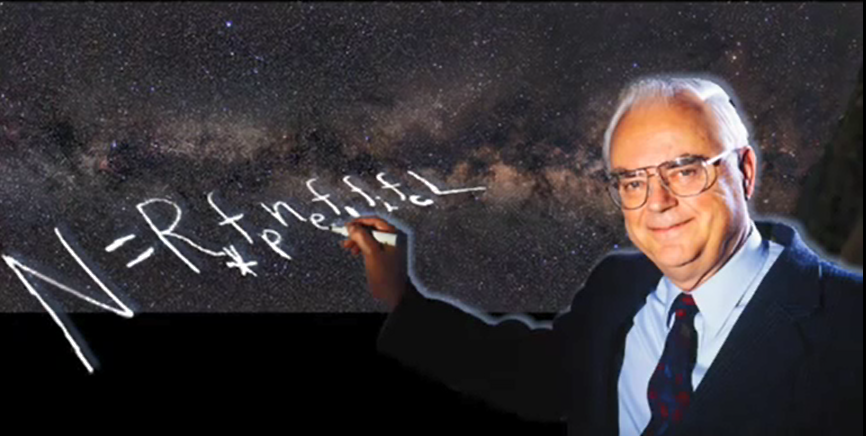 It was Dr Frank Drake (pictured above) that came up with the equation in 1961 when he was setting the agenda of a meeting with other like minded scientists.

That said, just because there is an equation doesn’t mean that there definitely is life.

In part 2 we will look more into the search for life.