Book review -“If an Asteroid Falls on Kolkata, India” by Tanushree Chowdhury

This blog post is a sequel to the previous post on the special Writing Project organized by Chinthaka Nanayakkara focusing on World Asteroid Day on 30th June 2020.

If you have not yet read it please take a look at how this all started! Or else you would find all this bit confusing, my Spacelovers!

All Writing Projects by Chinthaka Nanayakkara is based on a particular day which is internationally recognized by the United Nations. The current writing project, his sixth, is based on World Asteroid Day 2020.

The participants of WRIPE-6 (or the sixth writing project) are all given a writing prompt when they are selected for the project. This time, the prompt consisted of 3 parts. Maximum word count is 300. On reasonable grounds, additional paragraphs are allowed.

First part, the selected writer has to describe his city or town he / she is currently residing.

Second part, the writer has to imagine that a large asteroid is about to fall on his city on 30th June 2020.

Third part, he / she has to describe the extent of damage an asteroid could cause and suggest plans to save his / her fellow countrymen from the impending disaster.

Short Sci-Fi stories that consist of all three parts are also accepted.

Tanushree Chowdhuri accepted the challenge with the start of May and published her mini e-book on 27th of that month. It’s a 7 minutes read and covers the story genres of Action & Adventure, Thriller & Horror. But it’s a safe read for all ages. 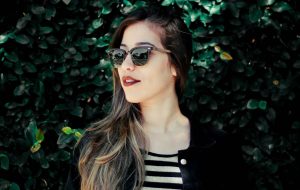 The story starts with a look back at how dinosaurs were suddenly wiped out from the face of earth owing to what was later argued to be an asteroid colliding with earth during the Jurrasic era. And Tanushree points out that “… the person who must have once said that history repeats, he definitely wasn’t wrong …” which is followed by the total annihilation of an entire human population in Kolkata, India… 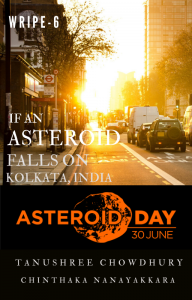 She has successfully used this intro to creatively cover the 2nd part of the writing prompt of WRIPE-6.

Then Tanushree brings the reader sharply back to reality, with the narrator awakening on 20th June 2050 from a comma after the Kolkata disaster. Then, She returns back to the date in which it happened: 20th June 2020.

She describes Kolkata as “embracing a sky high population of 4.5 million, Kolkata is India’s fourth most populated city, being the home to various festivals along with its cultural diversities in a dazzling display …” This is where she covers the 1st part of the writing prompt. The reader is transported to that “city of joy”. She explains “… if you want a city with a soul, then Kolkata is the place for you”. Then her story unfolds around her characters that are few but undeniably vibrant.

Read the book FOR FREE! and don’t forget to Like, Follow, Share while you enjoy her story! You can also drop a friendly hello to her anytime!

A Senior Coordinator of WRIPE-5 (World Water Day 2018) and WRIPE-6 (the current writing project on World Asteroid Day 2020), Tanushree is the Hindi and Korean coordinator of all WRIPES organized by Chinthaka Nanayakkara. She is also a Brand Ambassador of Sweek.

Her thrilling Fan Fiction the “Clash Of The Heroes” a superb crossover of Avengers and Star Wars was the Winner of #SweekStarWars contest. Her WRIPE-5 entry, “Poisoning of Cerbus” was shortlisted in #SweekSpace. The “Growing Pains” a Fan Fiction Anime became the People’s Choice of #SweekFanFic contest.

An #activesweeker, Tanushree Chowdhury occasionally goes by the pen name of Cynthia Williams as well. So far, she has published 46 stories in Sweek and has gained nearly 400 followers. Her story “For The Love of a Daughter” attracted over 100 Likes within a very short period of time. She is also an avid reader and loves making friends by helping anyone in every way possible.

In June 2020, With only little more than 100 days left to go and WRIPE – 6 english version rapidly going viral in the internet world, while its Spanish, Portuguese, Norwegian, Hindi and Korean versions closely following behind, the Chief Organizer of WRIPE-6 met this inseparable writing companion online for a full author interview. You can enjoy it here!

Tanushree maintains the Hindi version of the WRIPES official blog at hindiwripes.blogspot.com

Dwarf planets are what you think they are. They are the small rocky body's that orbit the sun in our Solar System. There are 5 officially recognized dwarf planets in…

If you have learned about the planets in our solar system, you should by now be able to name them all. Give it a go and see! You should also…