Book Review – “If an Asteroid falls on Singapore” by Pritika Aggarwal

For our sci-fi loving book worms this is number six of our highly informative book review series released in the wake of World Asteroid Day 2020 that was celebrated across the world on 30th June 2020.

The reviews are written for more than twenty mini e-books that were published in sweek.com for the sixth writing project or WRIPE-6 which was organized by a former brand ambassador of that platform. 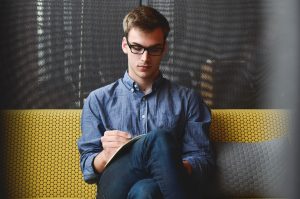 This time we are going to take a closer look at the mini e-book “If an Asteroid falls on Singapore” by Pritika Aggarwal who is also the WRIPES Coordinator for Singapore and India. Pritika’s Sweek profile describes her as, “loves to read and grow her knowledge in the fields of languages, sciences, and math enjoys diving into great fictional and literary works and absolutely adores writing. She is a fitness enthusiast, or even a naturalist, but her true meditation comes in being a logophile”

Pritika’s entry to WRIPE-6 “If an Asteroid falls on Singapore” begins with a lovely and elaborative description of the island country – the ‘little red dot’ so named after its continuous hot weather that prevails throughout the year. She points out the double entendre ‘the fine city’ which the place is called due to the most outrageous fines imposed on the absent mindedness of its citizens. 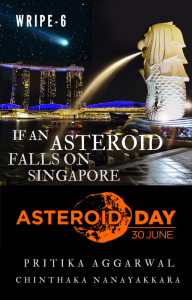 She explains DORSCON – the Disease Outbreak Response System Condition is at ‘orange’ but still not ‘red’ with regard to the covid-19 situation at Singapore. She sees the spread of the virus as “nature’s way of telling us to restore tranquility and harmony with and within her”

Taking note of the scarcity of natural catastrophes in the ‘little red dot’ because of its placement near the equator, Pritika brings our attention to an actually real life incident reported by the American Meteor Society (AMS):

“A very bright fireball described to be green in color was seen streaking through the sky over Malaysia and Singapore on February 11, 2020. The meteor was spotted around 05:01 LT on February 12 (February 11 at 21:01 UTC)”

An eye witness has stated: “It felt super near as I was standing on my balcony watching it explode and it disappeared within split seconds,” explaining the her initial experience as “At first, I thought it was going to either land into the sea right below my house or the wetland opposite because it was too big and it seemed very near.”

In her story, Pritika has cleverly woven this news fact to the narrative and proclaims ‘asteroid2020’ as the ‘grandfather’ of the ‘green fireball’ that was sighted on 12th Feb. Asteroid 2020 will hit earth on June 30th, the World Asteroid Day.

She does a very good job here, describing the panic that is felt by the Singaporeans. “Sprinting across the roads, glaring above into the sky [and] pleading for forgiveness” their behavior is something right next to madness and insensibility.

Then she suddenly twists her narrative, surprising the reader at the last paragraph and saving Singapore – and the world – at the last minute. It is very beautifully done.

You can now read “If an Asteroid falls on Singapore” for free on Sweek.com. If you find the story entertaining you can Like, Comment and share it with your friends.

It is also available in Hindi, German, Spanish and Portuguese. 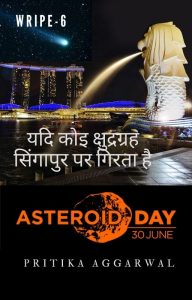 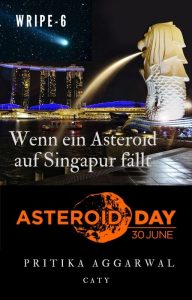 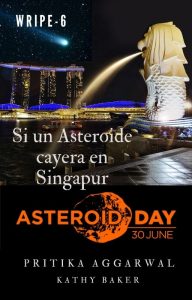 Pritika Aggarwal currently maintains WRIPES blog on Singapore, being the WRIPES Coordinator for Singapore and India. Read her author interview in full.

This section will give you information on the lives of some of the most famous and important people who have been and are involved in the exploration of space. The…

In this section, we are going to continue the search outside of our own planet, and we are also going to ask the question. What if we are alone in…